— Paulo Freire, Pedagogy of the Oppressed

This quote is for the folks who both:

a) send their children to schools that provide small classroom settings, individualized attention, a plethora of academic, athletic and  social activities, and

b) at the same time, push for public school students to follow a strict and mind numbing standardized testing agenda, at the expense of the more engaging, stiimulating and sometimes beneficial activities they insist their children receive.

In his Edutopia blog post, the Reading Rainbow host talks about the importance of reading and how we can try to instill s love for reading in students. I love that he says “We have to show up where kids are hanging out, and bring them back to the written word.” I also appreicate that, right at the begining, he acknowledges visual mediums as a useful form of education, as not to say that they are less important than reading, but that reading should also be just as important. I can’t wait until my copy of Paul Tough’s recently published book, Helping Children Succeed comes in the mail. I wrote a brief review on his last book, How Children Succeed, which I loved for it’s ability to connect  learning behavior and attitudes, both positive and negative, to nereoulogical processes. For now, I’ll just read his recent NYT article that features an adaption of one of the sections from Helping Children Succeed.

Here’s a quote from the education policy classic Savage Inequalities:

We are preparing a generation of robots. Kids are learning exclusively though rote. We have children who are given no conceptual framework. They do not learn to think, becuase their teachers are straightjacketd by tests that measure only isolated skills. As a result, they can be given no electives nothing wonderful or beautiful, nothing that touches the spirit or the soul. [emphasis mine]

This is a quote from a Camden, New Jersey public high school principal. The sad part is that, if you read the quote today, and had no context, you wouldn’t be able to tell it was said in 1990. There are far too many public schools operating the same way today. Jesus. When will it get better?

Here’s a fantastic article about the Walmart Family Foundation’s expanion of their hellbent support of charter schools. If you don’t want to read the whole article, skip to the last few paragraphs. The author, Valerie Strauss, makes a key point. She essentially says it doesn’t matter if you’re pro or anti charter schools. It doesn’t matter if you’re in between. What does matter is where each community stands on the matter and due to the Walmart Family Foundation’s heavy funding, with no regard to what communities want, this is just another example of the Man forcing his own, self-centered beliefs on (in this case) a mass group of people. As Strauss questions, how is this democarcy when a hanful of people are deciding our country’s educational future?

Tiny Dintersmith and Ted Wagner write, “‘You can either get your college degree or end up with a menial job.’ But the reality in America today?  Millions of adults end up with both.”

It’s upsetting that leaders in the higher education community won’t acknowledge this.

It’s even more absurd that colleges with gross price stickers take money from middle income families that have to take out loans to pay the school, but end up with a degree that can’t get them anywhere.

Our students aren’t counseled enough to understand their “investment” both in high school and throughout college. Diane Ravitch has said that college isn’t necessarily for those seeking to make tons of money, which must be true because graduates are coming out with tons of debt and low jobs–there debt far exceeds there income.

Some people say college is a lifetime investment, so even though one may not make much right after college, the gains will come later in life. But that can’t be the case for, say, art history at middle rate college.

I thinks students are conditioned to believe that to believe that hard work in first high school, then college, is the key to “success” but they’re not told that there’s so much more that goes into that, including finding what one wants to do with their life in order to make these loops worth it.

We put too much pressure on students to perform well academically and tell them that going to college but they’re too young and have been conditioned to theoritical learning to fully understand what kind of real investment they’re making. The schools certainly won’t stop and tell them.

Part of me thinks students should pay the amount economists predicts what a students major will garner, not necessarily throughout their lifetime but maybe expected salary in the current job market. It seems to be fair for the students because one ridiculous high price tag does not benefit all. We sadly go under the assumption that it does.

While I understand the debate of which literary works should and shoud not be taught in public schools is imporant, in this day and age, I think there should be emphasis on economics.

As an English major and Creative Writing minor, I’m all about litearture and reading. But Between the temporary scare of the fiscal cliff and the very slow recovery from the increase in in unemployment, the economy has our constant attention, or, at least it should. The main reason why 2008 financial crisis and subsequent recession occurred is because, well, no one (myself included), knew anything. We left it up to the big guys, who proved to be very small, sleazy, or both (with the exception of a few). My own neighbor, a 45 year old woman who reads an insane about of gossip magazine, hadn’t a clue of what a surplus or a deficit was. I mean, she knew in the sense that it could apply to her monthly bills, but hadn’t the technical terms to call it.

Daniel Hamermesh, an economist and professor at the University of Texas, titled his book “Economics is Everywhere.” Oh how true this is; we just aren’t educated enough on the subject area to realize it. Parents seem to be over worried that children are getting too much fantasy and not enough practical application of their studies. With economics, we could tie it to every day actions that a student can easily relate to. The purchasing of lunch is an example of something supplied because it was demanded by the student. Or, the changes in a bag of Doritos in a year is something that a student could notice but doesn’t realize the economic reasoning behind the fluctuation in prices. Or, that money is a medium of exchange. At some point in my distant past, I would have considered Yu-Gi-Oh cards a medium of exchange, at least for 90s kids. I could get anything I wanted with an Exodus, which would be the equivalent of a million dollars (think children like exaggeration). The idea that when supply goes down so prices raise the roof was evident to north eastern families as an effect of Hurricane Sandy. I pointed this out to my brother when we had to wake up at three o’clock in the morning, buy two batteries (not packs but single batteries) for $4 for our flashlight, then wait on line for three hours to see if we could get gas at a station we heard would get electricity (that never happened).

Basic economics is fairly practical and forever so constant that we should learn it pre-college. I stress this because not everyone goes to college, but most people, or at least more people go to high school than college (duh), so there’d be a wider audience. It should be a mandatory course not just optional, like English or basic algebra. I have a friend who did not take economics at all in high school (she doesn’t remember why), and another friend who too it because it was optional (it was that or Government). I say, no more choices. We need to better prepare Americans on what is going on.

Had friend number one taken economics and she were pointed to the unemployment rate and decrease in funding in higher education, then she might have thought twice about picking a school with such high tuition costs.

So when the next economic scare comes around (in late February) we would know or have some idea of what the journalist on CNN is talking about. There are a lot of people who get caught up in the hype and haven’t a shoe of what the fuss is about, let’s not make out children one of them.

This post was inspired by Daniel Hamermesh’s “Economics is Everywhere,” and Michael Lewis’ “Boomerang”, my current reads for the week.

As an English major, I did not think I could understand economics until Michael Lewis. Over the summer, I read “Liar´s Poker” and “The Big Short”. Now, after ¨The Brief Wondrous Life of Oscar Wao¨by Junot Diaz (and fictional), I am reading Lewis’ ¨Boomerang¨ His style is impeccably comprehensible and simply for those who, like myself, thought they could not understand economics. I don´t want to get into it now, but economics is a subject that has a stigma that it is and is for people of a certain league. Time after time, Lewis proves that this isn’t true. He notes in the first chapter of ¨Boomerang,¨ that an Icelandic man who was a fisherman from the age of 15, until when he was 31,decided to become an investment banker without any prior education (or, at least, formal education).

A further review on the book to come!

“There it was, the Decision That Changed Everything. Or as she broke it down to Lola in her last days: All I wanted was to dance.What I got was esto, she said, opening her arms to encompass the hospital, her children, her cancer, America.”

In ” The Brief and Wondrous Life of Oscar Wao”, Junot Diaz illustrates how the choices we make can change our lives forever. In this particular story, the family history of the Dominican family, the De Leon’s is deeply rooted with the larger history of what was attached to the Dominican history. He shoes that the actions of our past so strongly follow us in ways that we cannot shake off, in silent ways that we not see, in ways that will affect family members who are not even being thought of yet.

My histroy professor tried to connect a series of minute and simple events to the imagery of an imaginary umbilical cord that stays with us and that flows through each family member, forever tying us to the past.
Diaz’s novel does a great way of illustrating this metaphor.

I almost started describing this novel as a fat kid who can’t seem to lose his virginity. But that wouldn’t have sufficed. It strips the story of its Zafas and Fukus; its diaspora and its tension; it takes out the family lineage and the historical context that contains dictatorship, corruption, and racism. More importantly (at least to some), this bare description entails no expression for the desire to be loved by someone other than your troubled yet headstrong mother, sister, grandmother-cousin, and your heroin addict tio.

Four Stars… Will elaborate more on style and more at a later date.

This is a photo I took of a close up of the last page. 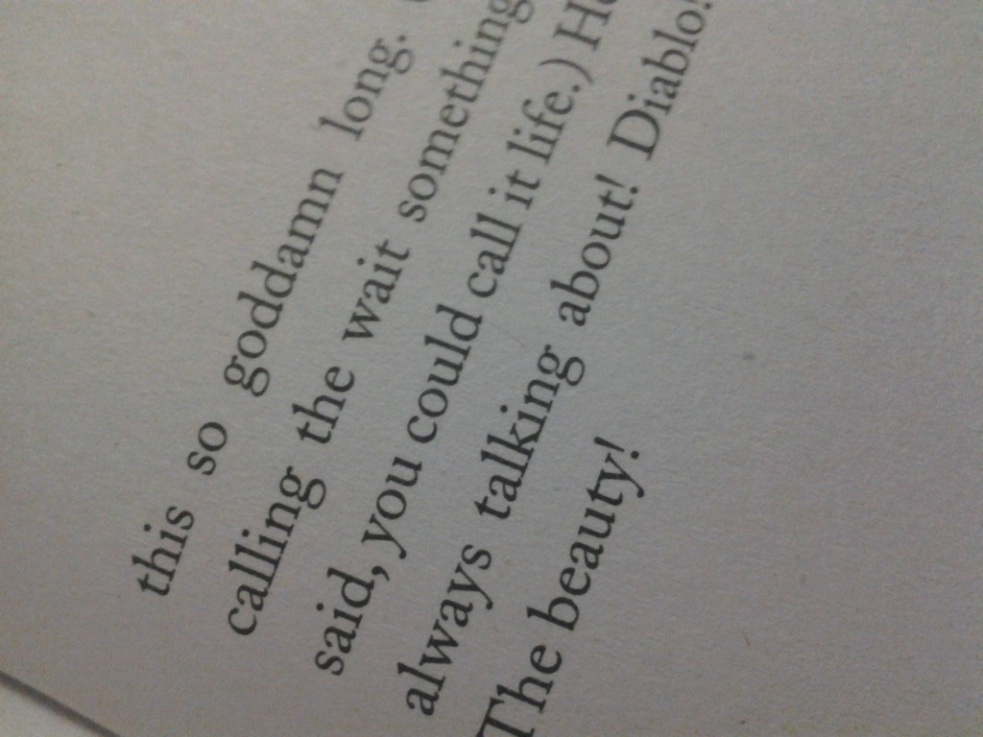